New to Leicester City Transport as number 154 this bus was part of the 160-vehicle post-war tram replacement intake. Originally a 56-seat bus (H30/26R) the seating capacity was increased to 61-seats in 1955 and to 62-seats in 1957. 154 enjoyed a long life with LCT and received the revised livery of cream with three maroon bands in 1965. No. 154 was one of the final PD2s to be withdrawn in March 1970. Just over eleven years later, in 1981, No. 154 was re-acquired by LCT who undertook a complete restoration to full PSV standard which was completed in July 1983. The bus was then used for private hire and occasional use in service. It passed ownership to Leicester CityBus and First Group before finally being sold to a private owner in 2008.

1970-1981 After service with Leicester City Transport, the first time

On acquisition for preservation in 2008 No. 154 really just required some basic maintenance and plenty of TLC to make it okay for use again. It then became a regular attendee at many bus rallies. It changed ownership in 2009 when a Simon Gill, a Director at Leicester Transport Heritage Trust, became sole owner. Simon donated the bus to LTHT in April 2015 for continued preservation. 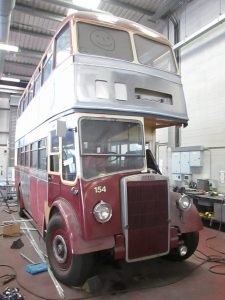 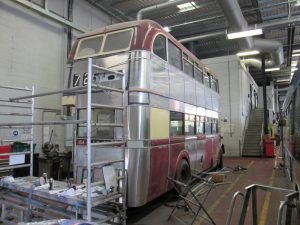 ‘One of the 65 historic rear entrance Leyland Titan ‘PD2’ buses that carried thousands of people around the city of Leicester for many years No.154 is back at First Leicester’s bus garage for a mechanical and bodywork overhaul.

In 1982 apprentices at Leicester City Transport restored the bus into its former glory, now 35 years on, the same engineers are passing on their skills to new apprentices who will undertake the work and get it ready in time to attend scheduled heritage events over the summer season.

Nigel Eggleton, Managing Director for First Leicester said: “Milestones don’t come around very often but this one is definitely an event that deserves recognition.

“Our engineers who helped restore the vehicle 35 years ago are still employed by First Leicester and are passing on their skills to our new generation of apprentices. They will be shown how to maintain and preserve a vintage bus, which is a totally different procedure than maintaining and looking after buses from our modern fleet.

“Our partners at the ‘Leicester Transport Heritage Trust’ do a fantastic job in looking after the vehicle and presenting it at shows and heritage events around the country. It is important for us as a local business that ran these buses all those years ago and for the City of Leicester that we look after our heritage for everyone to enjoy.”

Richard Worman, Chairman & Restoration Director of the Leicester Transport Heritage Trust said: “I would like to thank our friends and partners at First Leicester for this tremendous opportunity.

“A totally unique set of circumstances where a vehicle goes back to the same skilled engineers that restored the bus all those years ago and pass on traditional skills to a newer generation.

The work will help conserve this piece of Leicester’s Transport Heritage for generations to come and also play a part in shaping the skills of the new apprentices at First, a great example of old and new working in partnership.”

We are pleased to report that the body and mechanical overhaul of No.154 was completed in November 2019 and the bus has now received a full commercial repaint into the livery it would have carried in the late 1950s/early 1960s. Fleet numbers, crests and legal lettering have been sourced and will be fitted soon.

The Leicester Transport Heritage Trust are pleased to report that our Leyland Titan PD2 No.154 has made a return to the road after a major mechanical and body overhaul. The LTHT would like to thank First Leicester for undertaking the majority of the work which also involved Thornton’s Refurbisments for providing a superb repaint into Leicester City Transport maroon & cream livery.

First Leicester offered to undertake this work as part of an apprentice training scheme. Interestingly several of the people that worked on 154 in the early 1980’s were still employed by First Leicester, some 35 years later. This included two who were apprentices in 1981 and worked on the bus when it was originally restored. With First taking on new apprentices there was a very unique opportunity for those men who had worked on the bus 35 years ago to now teach the new apprentices body building and mechanical skills on the very same bus they had learnt on! This is something that we believe has never happened before.

The LTHT would like to thank City Mayor Sir Peter Soulsby and Deputy Mayor Cllr Adam Clarke for attending the 154 relaunch and a big thank you to Nigel Eggleton and the team at First Leicester. 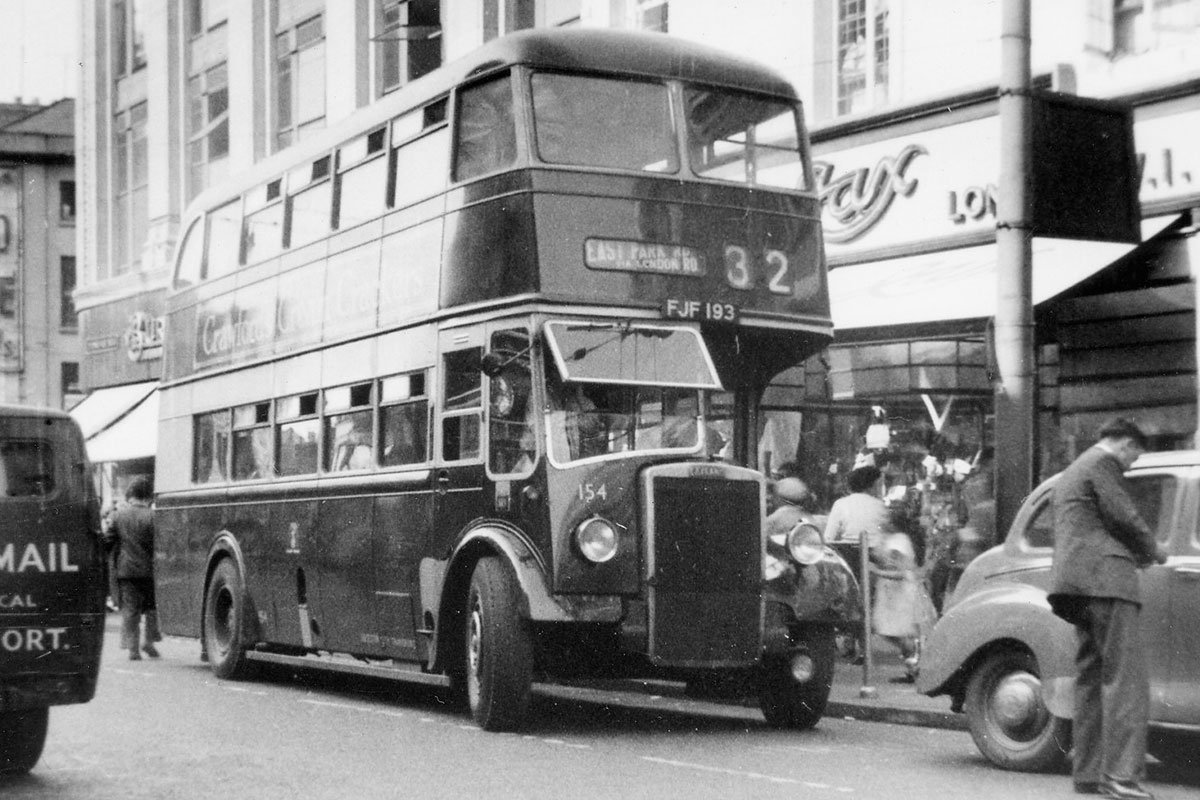 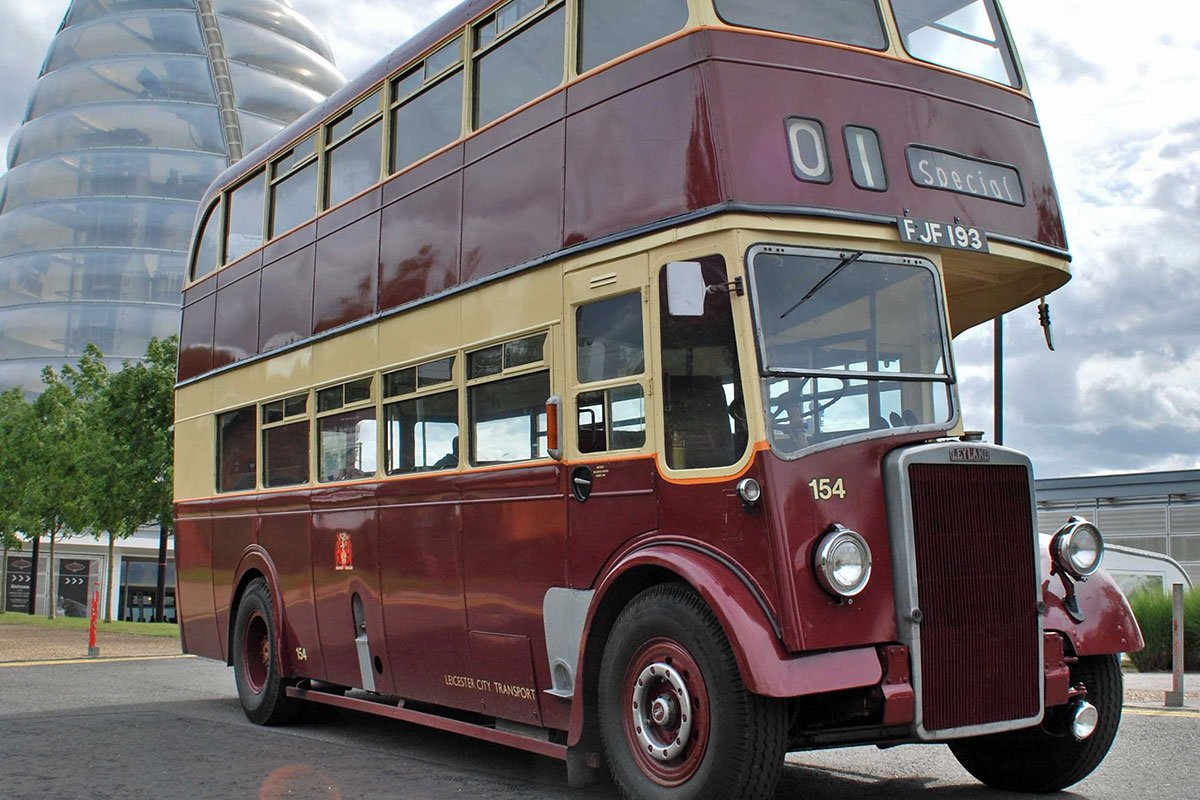 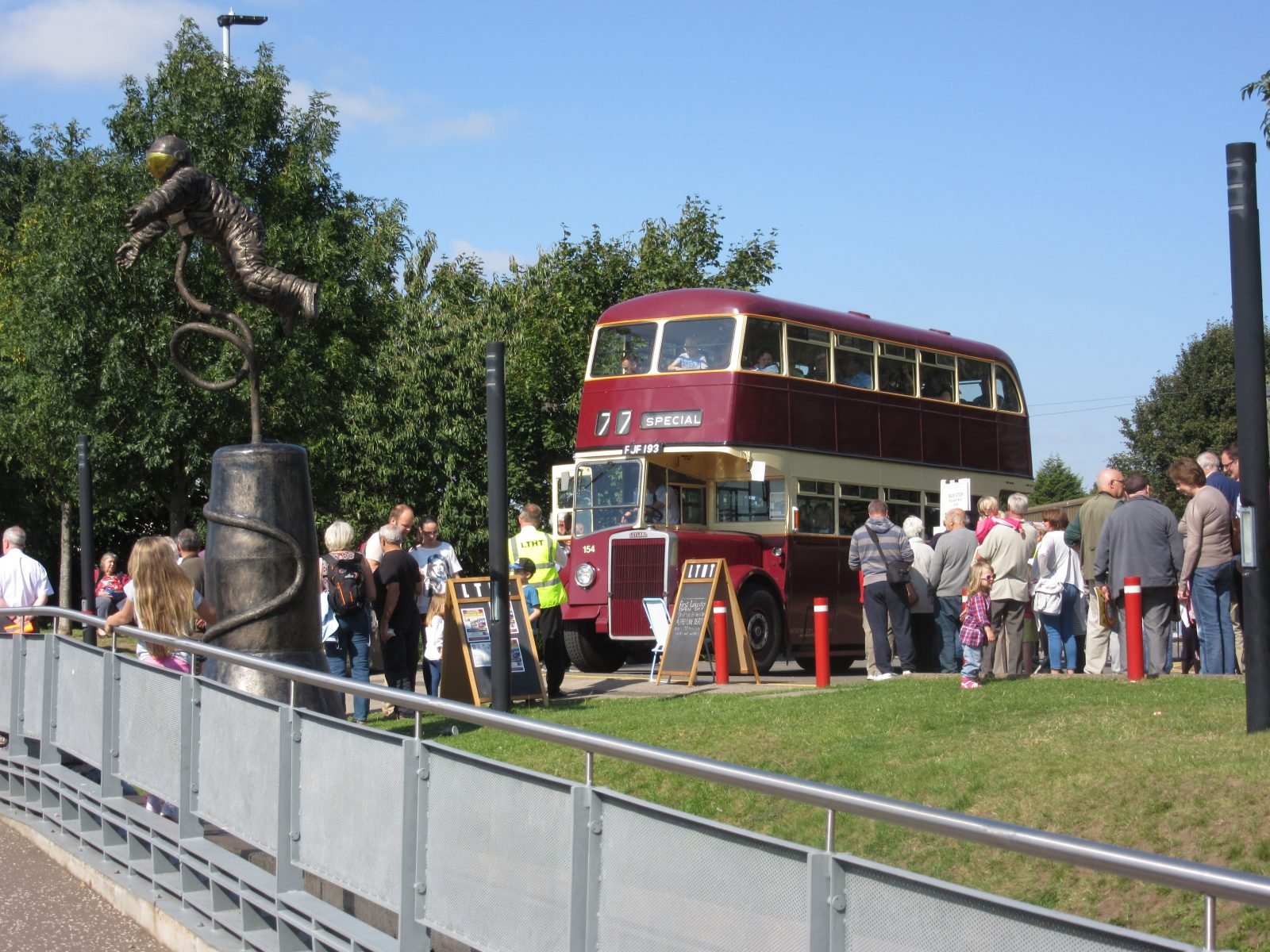 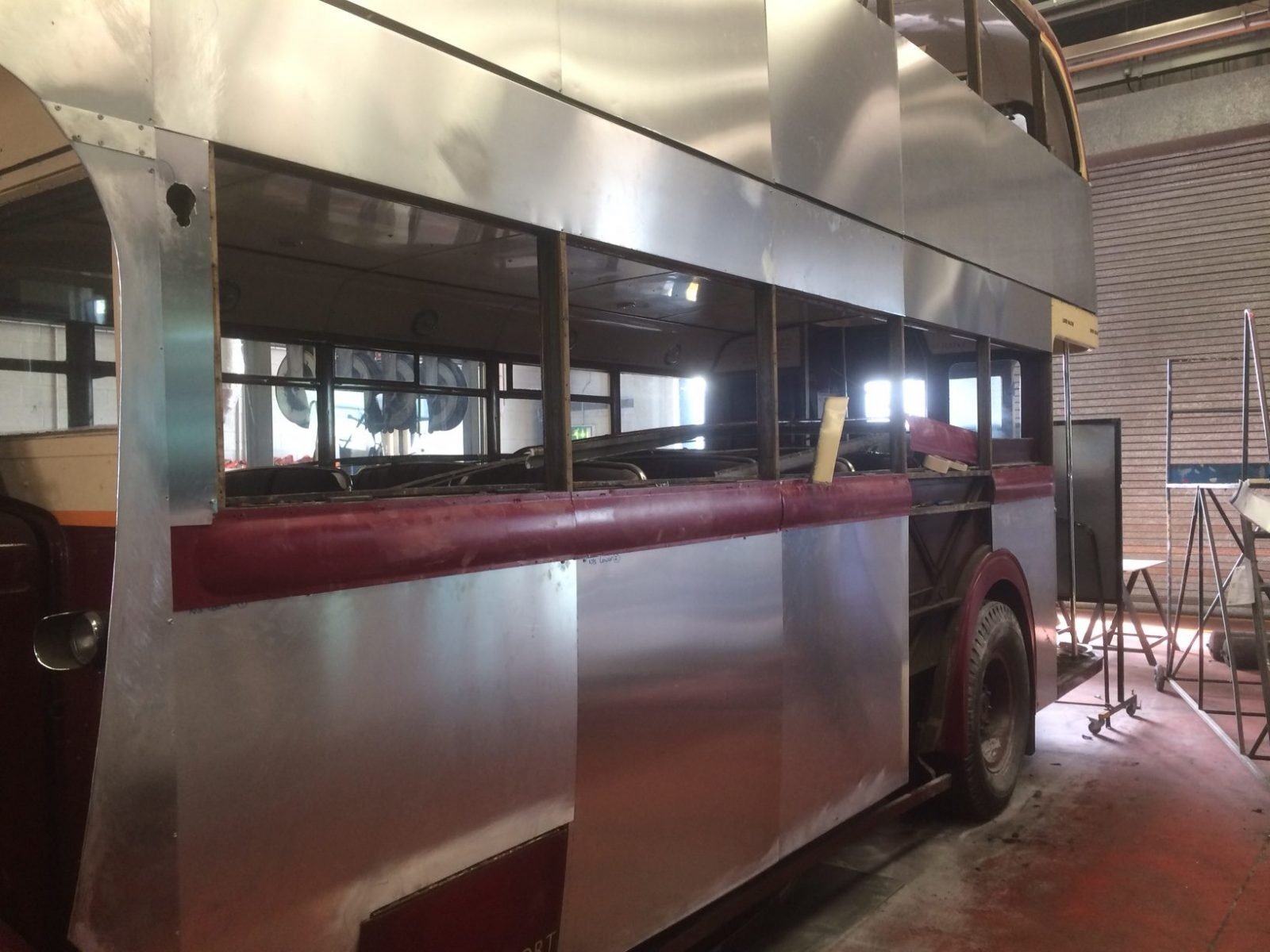 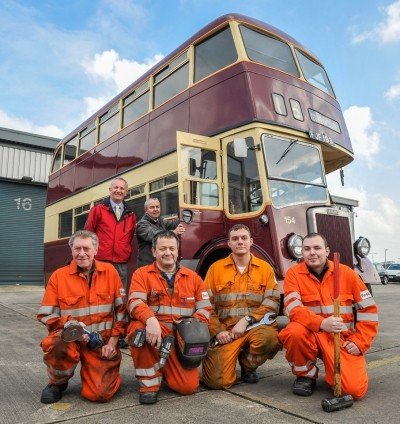 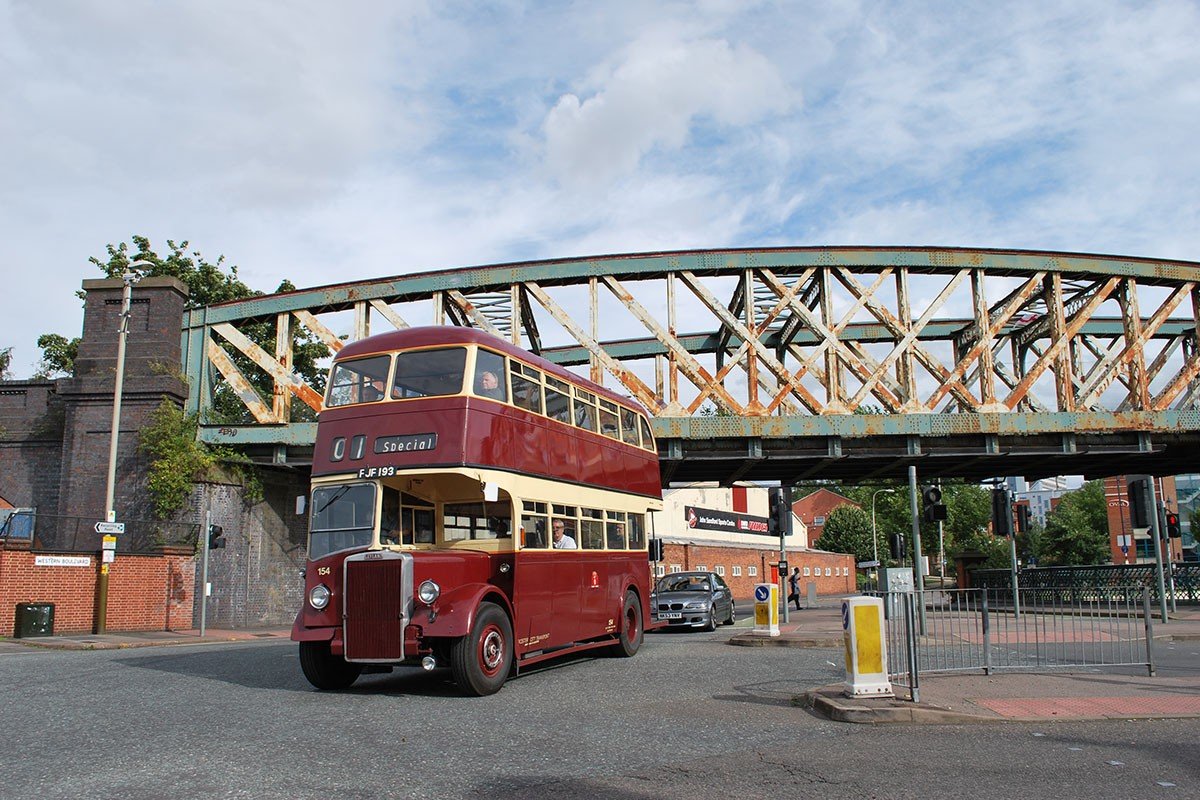 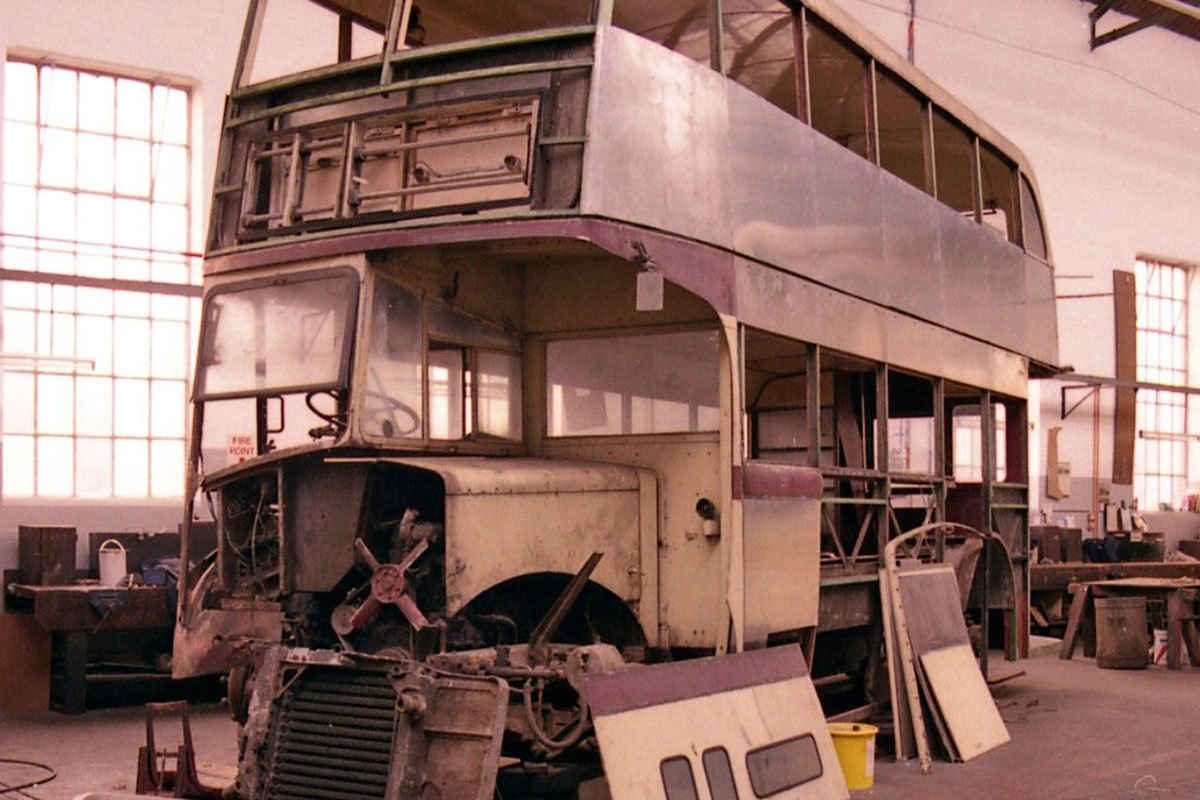 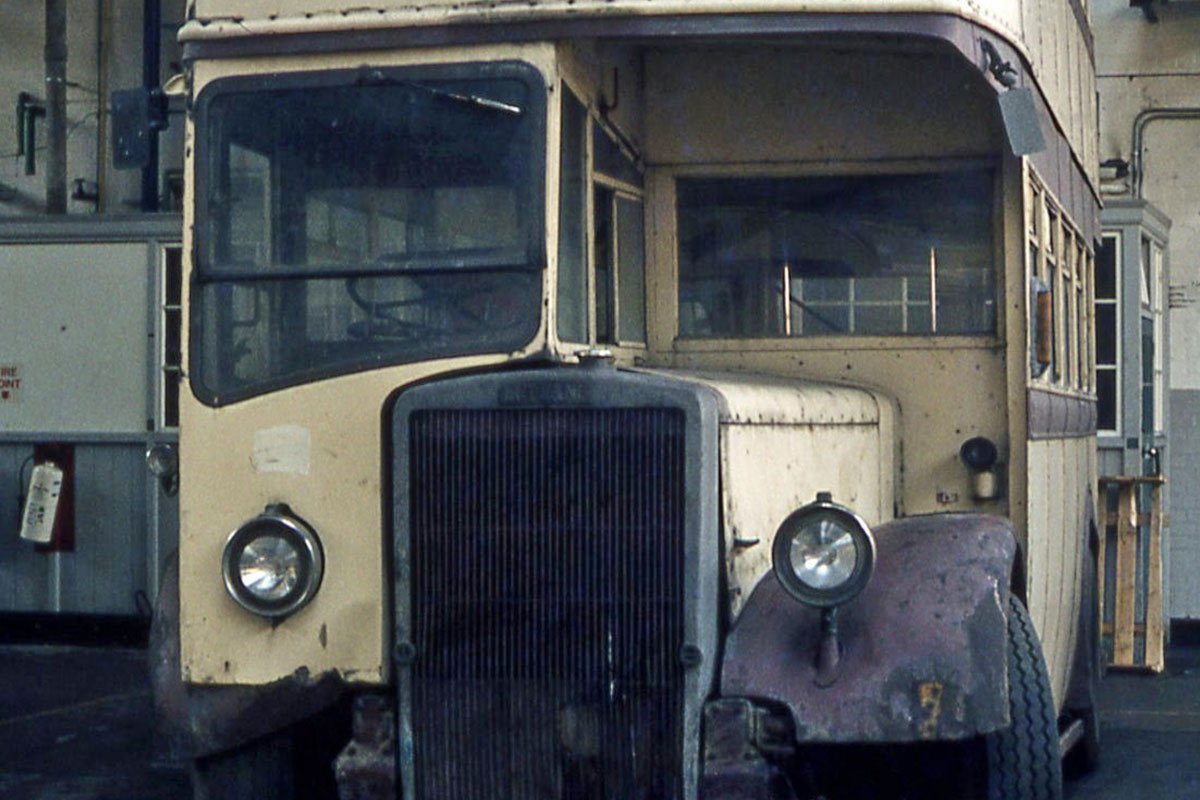 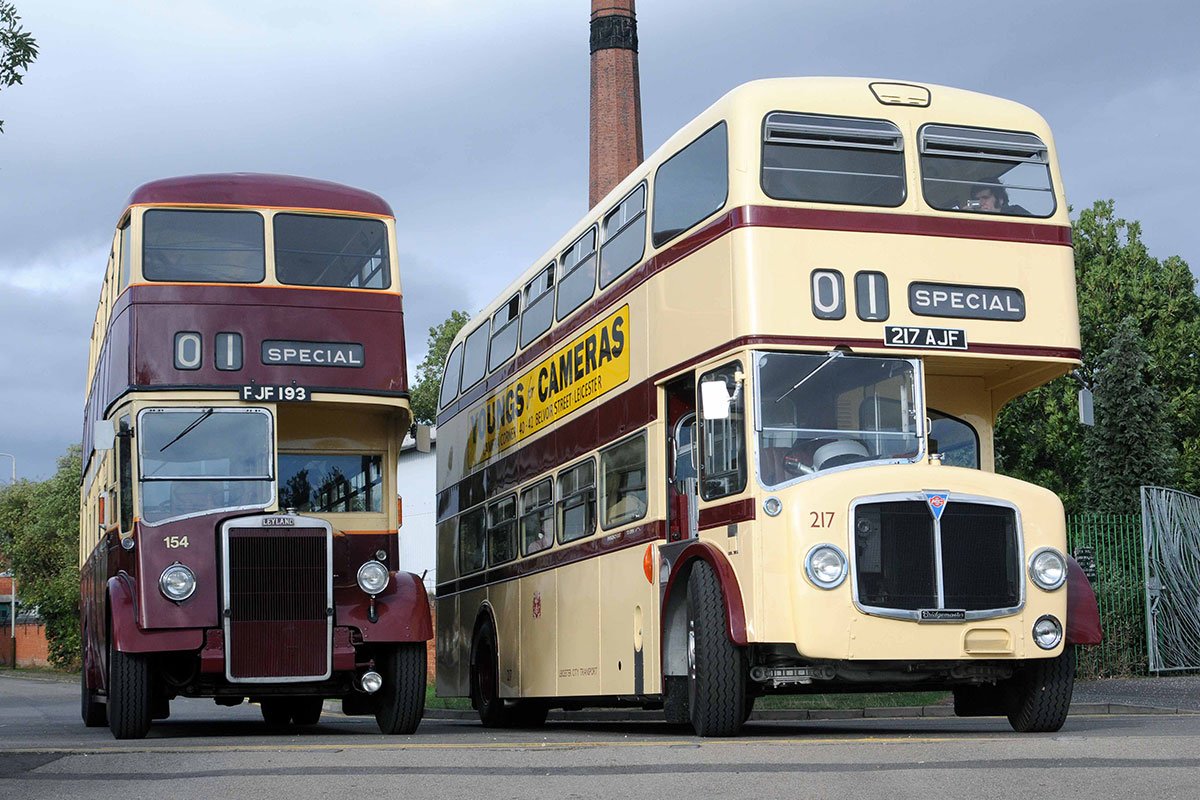 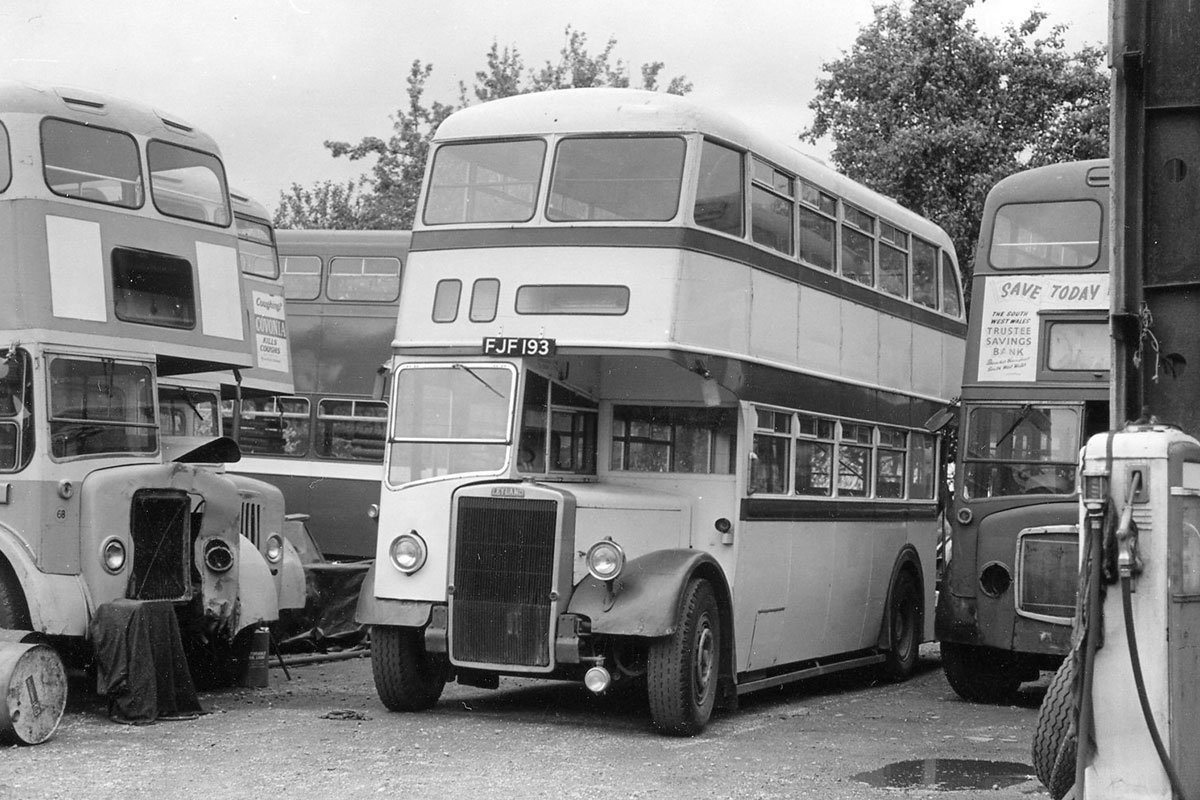 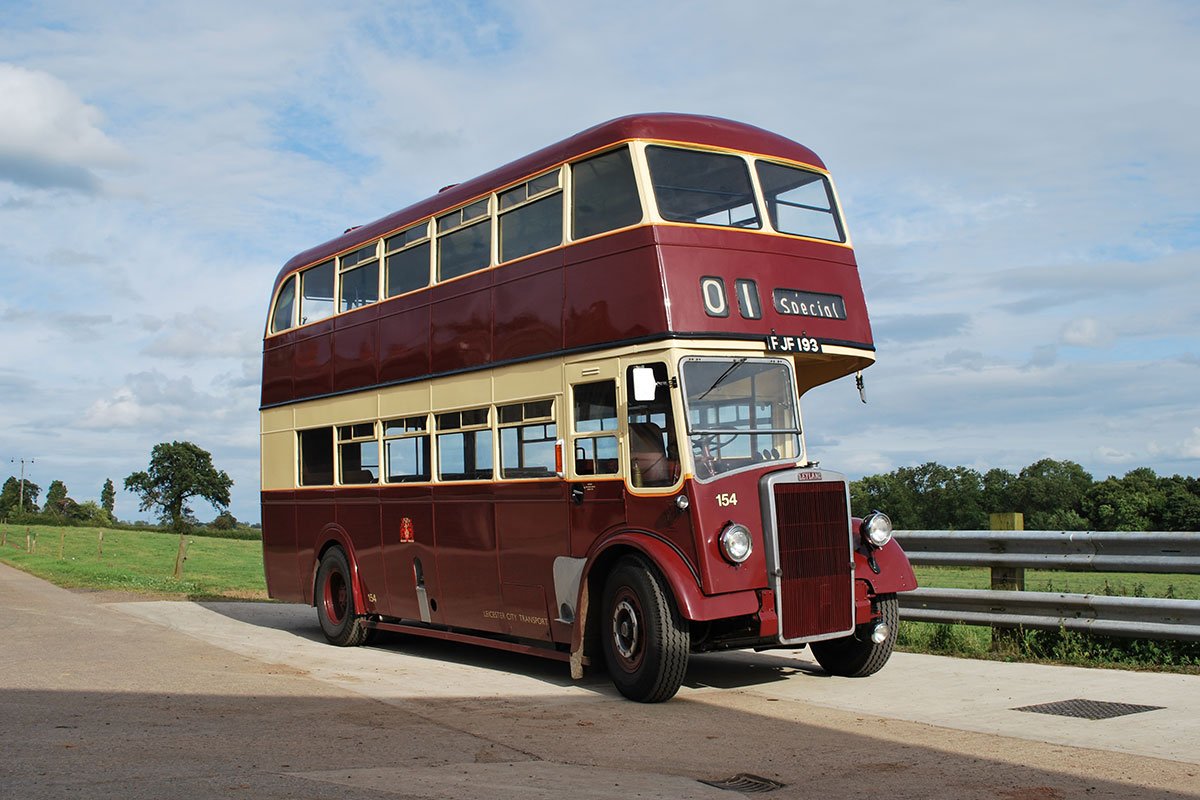 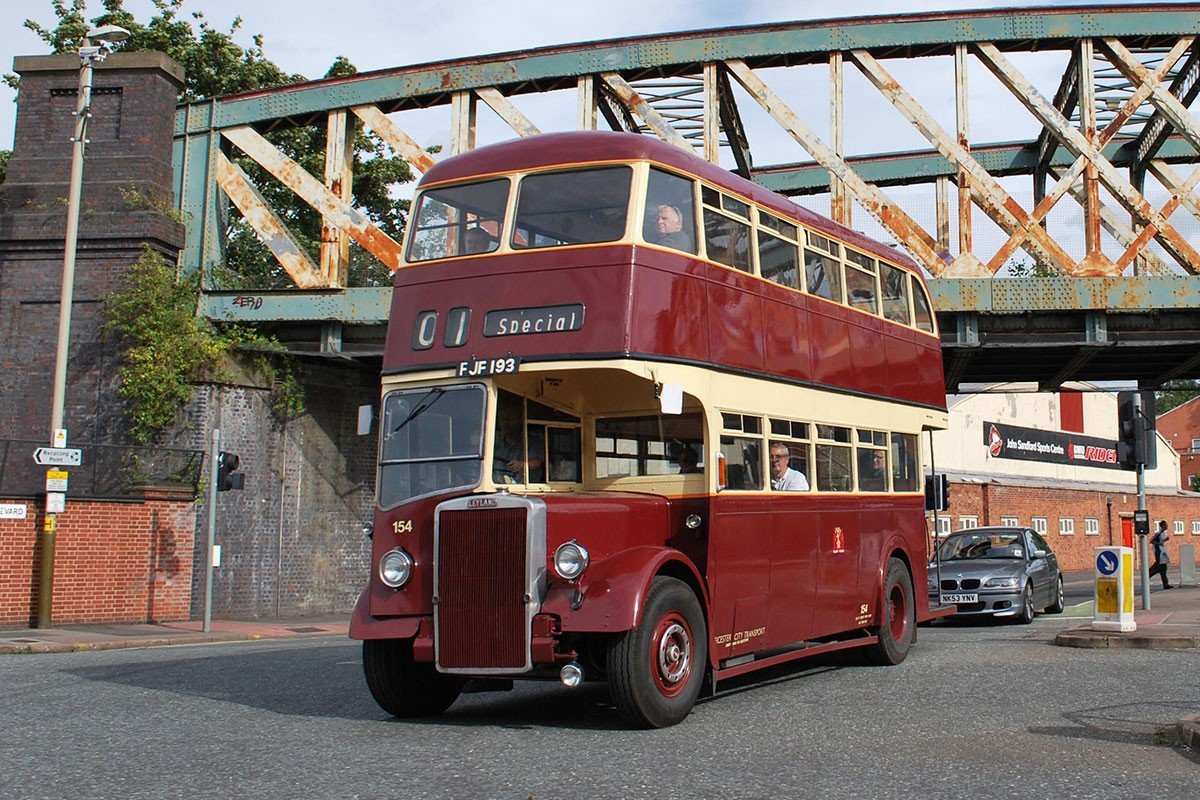 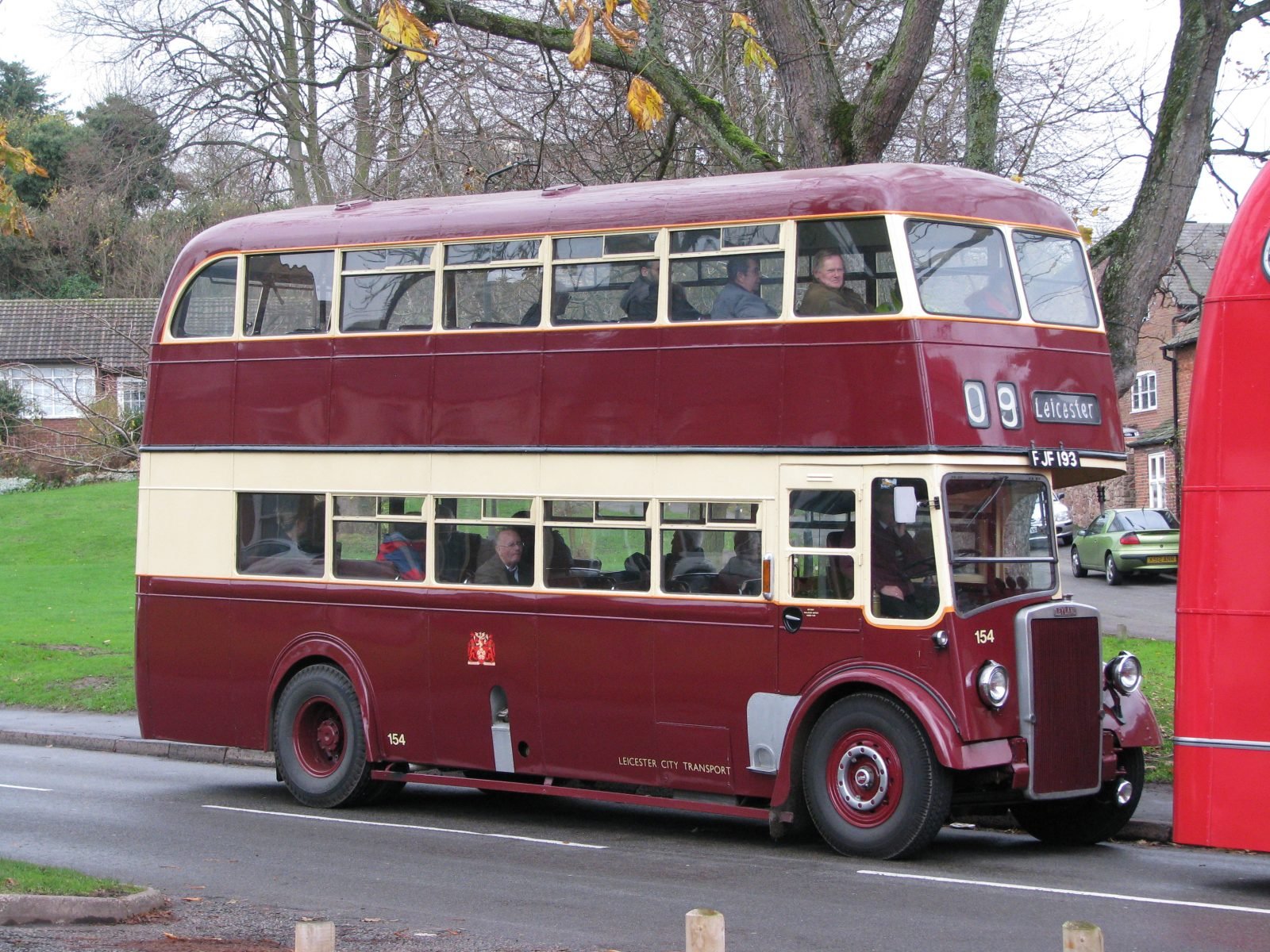 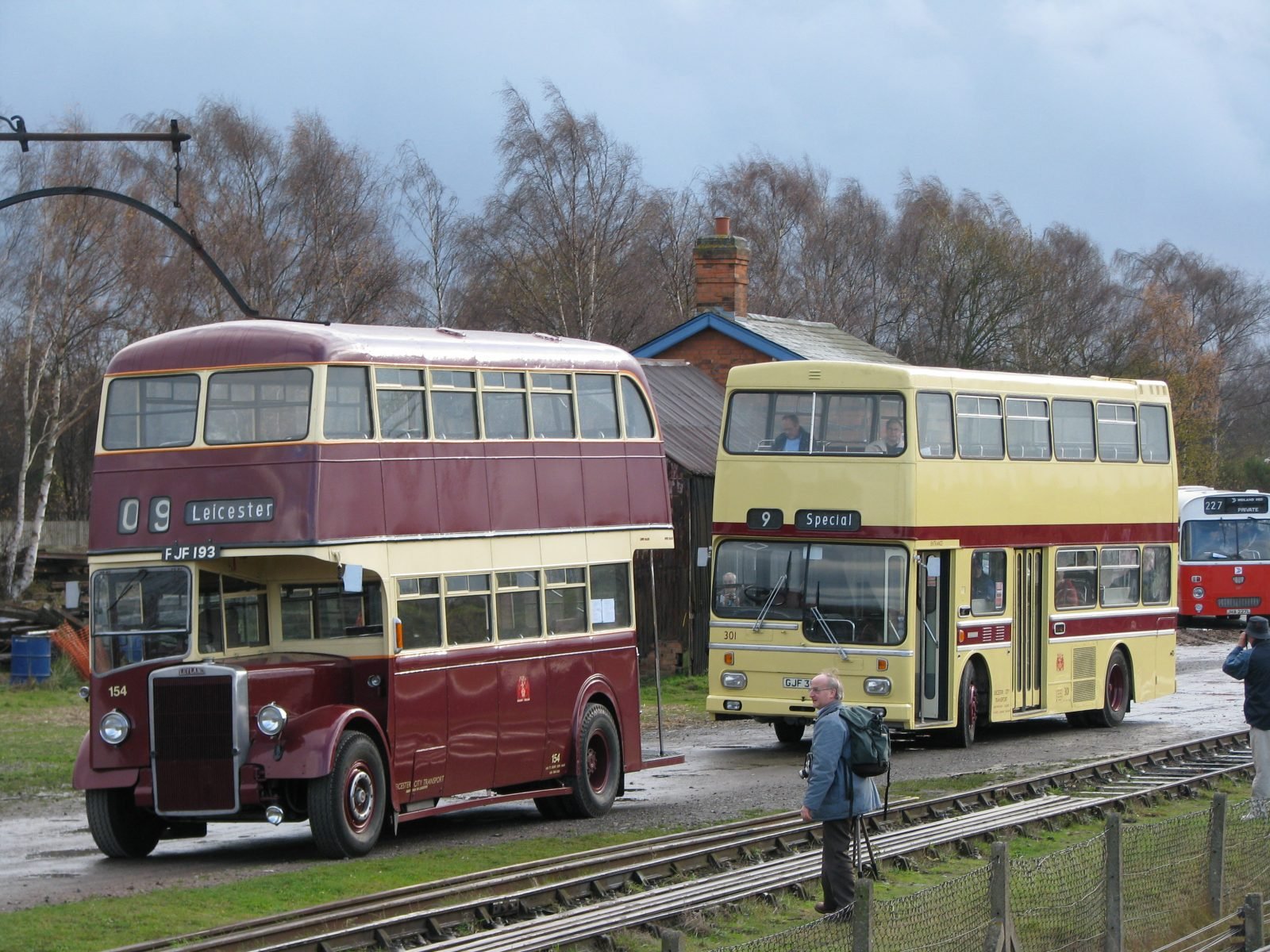